A recent report in national UK newspaper The Guardian confirms that the £40m Support Package promised to Chagossians in 2016 has yet to assist almost any Chagossians. The £40m Support Package was promised in 2016, when the UK government announced that they would not support Chagossian resettlement of their homeland, following a four year policy review. In her piece for The Guardian, Kate McQue speaks to a number of Chagossians in serious financial difficulty who have been una
0 comments
Stefan 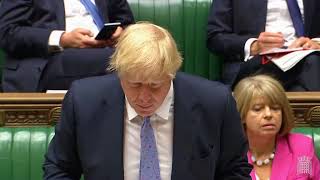 UK Foreign Secretary Boris Johnson answered a question in Parliament about the government's treatment of the Chagossian people this week, pledging to be "as humane as we can possibly be" and recognising their "justified complaints." He was speaking in response to a question from Labour MP Catherine West, a former shadow Foreign Minister and member of the All-Party Parliamentary Group on the Chagos Islands. Her question was "Will the Foreign Office review its current position
0 comments

UK-based Chagossian community leaders met Foreign Secretary Boris Johnson last month, as well as Lord Ahmed of Wimbledon, the Minister directly responsible for the British Indian Ocean Territory. The meeting focused on the proposed £40m support package for Chagossians communities living in exile. Short minutes of the discussion have been released, and are copied in below. These are not exhaustive, but give an indication of the main points of discussion during the meeting. Cha
0 comments