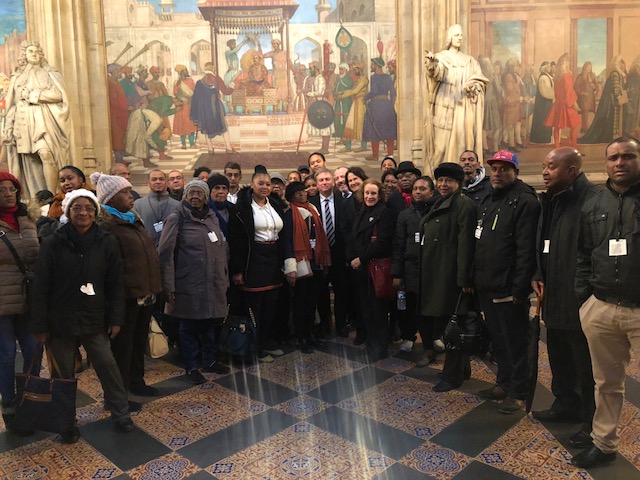 Or read it here in Hansard: https://goo.gl/uWhdYx

Today, Henry Smith passed a motion in parliament which, if passed, will allow descendants of native Chagossians to receive British Overseas Territory Citizenship (BOTC) status. Prior to this, the overly complex and unfair nationality law made it difficult for second and later generations born in exile to receive the same nationality status as the first Chagossians born in exile.

The Bill passed it's first reading yesterday, and is now scheduled to have it's second reading on 16 March.

A large delegation of Chagossians were in the Public Gallery of the House of Commons to offer their support in person, showing just how important this issue is to many in the community.

After being exiled, Chagossian families were dislocated and the diaspora forcefully fragmented mainly across the UK, Mauritius and the Seychelles. This has forced, and continues, to force families apart.

In an aim to simplify Chagossian nationality law, this bill will allow anyone that can prove they are of Chagossian descent to register as a BOTC. Currently, only the first generation born in exile are permitted to do this.

This also means that Chagossians wishing to apply to become British Citizens will not face the £10,000 financial barrier they were previously faced with, as it will bring that figure down to around £2000.

The bill is not only logical but will allow family unification and promise to end the struggle for many Chagossians faced with immigration issues such as deportation and detention. It also acts as a small gesture of reparation for the immensely unjust act on the part of the British government.

Although it’s difficult to estimate how many people will benefit from this bill, it is certain beneficiaries will number in the thousands, and families with disjointed immigration statuses will face less of a financial strain. And this bill of course will promise a brighter, stable future for further generations.

The Bill is now due to get it's second reading on 16 March. And we'd also urge the UK government to seriously consider backing it's provisions, as part of the 'Support Package' they pledged to put in place last year to "help Chagossians where they live now." And we ask the government to waive the fees entirely, as a gesture of good will to the much abused Chagossian community.

"I am a patriot and I love my country. We do have a proud history and, I believe, a bright future. But our nation’s treatment of the Chagossian people is a blight on our country’s conscience—one that we can start to put right by helping these Britons all to become British overseas territories citizens."

“The proposals in this Bill would transform the lives of many Chagossians. If passed, it would prevent a huge amount of suffering and help our community to grow and flourish”.

Dieuma Soopramanien, a Chagossian woman in the UK trying to get citizenship for her children, says:

“It’s only because of the deportation I was not born on Chagos and my child is not a British citizen. We just need the Government to make it easier for us to live and work in the UK. It’s not fair they kicked us off our island then made it so hard for us to build a life here.”

"How thrilling to see this crucial piece of legislation move onto its next stage. I eagerly anticipate a productive debate on 16 March. In the meantime though, hundreds of Chagossians in the UK continue to live under threat of deportation or detention and I kindly encourage everyone to contribute to our 'fighting fund' to help alleviate some of the pressure Chagossian families are under."

“If passed, this Bill will lift some of the burden and stress that Chagossians suffer daily to keep their families together. After fifty years of suffering following an illegal exile, surely it is our duty to guarantee these people no second exile.”

Alex Finch, Senior Associate at Fragomen LLP, who helped with the drafting of the Bill on a pro-bono basis:

"The Bill isn't asking for much, simply to allow the Chagossians to restore themselves to the nationality status they would have held automatically were it not for the exile. We hope that the Government will take it in the intended spirit and bring forward legislation to help the Chagossian people."

“History is repeating itself in the most undignified way. The Government must take action now."

“This is to add insult to deep injury to British men and women. Fifty years on from a brutal exile from their homeland, their descendents now face deportation again. This is to repeat a wrong and create suffering down generations. The Chagossian people should have justice not a repetition of abuse”.

You can sign this petition, set up by Chagos Islanders Movement, to show your support for the Bill and it the changes it calls for.

UK Chagos Support Association has also set up a 'Fighting Fund,' to help Chagossians struggling with visa costs and faced with immediate immigration difficulties. You can donate to this via this website.